An Inexpensive trip to the South Caucasus
Edmund Deaton

My friend, Melanie Branca, and I just returned from an inexpensive trip to the South Caucasus, Armenia, Georgia and Azerbaijan. We left on Sept. 5, 2018 and returned Sept 23. We traveled with Exotour. Kakha Driashvili (Mr) | Tour Manager | Exotour Travel Company | 17, Pavle Ingorokva street | 0108 Tbilisi, GEORGIA| Landline: +995 32 2913191 | Email: info@exotour.ge |Web: exotour.travel | The cost for each of us was $1485.00.  This included 13 nights, airport pick up and drop off, hotels, English speaking guides and driver. Good buffet breakfasts were included in all hotels, but lunch and dinners were not included, except for one lunch.  We were pleased with this as we could choose our own restaurants.  A detailed description of the tour is on their web site, guaranteed departures every Friday from Yerevan, Armenia. The tour consisted mainly of staying in the capitals of the three countries and taking day trips.
We had investigated three other tours to these countries; they were equivalent, in length and the sights covered.  The difference was in costs:  one was $6000, one was $7000 and one was $8500. This was per person double occupancy.  We thought we might have to bring our own sleeping bags, but that was not the case. We travel a lot, usually two trips per year.  This was the first time we used an organized tour.  I am 88 and Melanie is much younger at 76.  Getting around in the Caucasus is not simple.  It is difficult to get from Turkey to Armenia (we stayed one night in Istanbul on the way over and three nights on the way back.)  The border between Armenia and Azerbaijan is closed. We flew from Istanbul to Yerevan, Armenia where we were met by the tour company and taken to our hotel.  There were three other people on this tour; they were at a different hotel.  Our hotel was the City Hotel. We did not like it; it was not pleasant and about one half mile from "downtown" on a dark street.  We moved to the Hotel Paris near the main street for the next three nights.  It costs us about $65 per night. It was a very good hotel,  In each of the three countries we had a good English speaking guide and a good driver.  We were driven in a Mercedes 10 or 12 passenger van.
Yerevan is a beautiful city. we really enjoyed it.  After four nights we moved to Tbilisi, Georgia.  There our guide was Ms Salome Dzvelaia.  She was very good.  Again our hotel was unacceptable due to location and appearance.  The tour company found us a very nice boutique hotel, Hotel City (no relation to City Hotel in Yerevan), on a main pedestrian street at only $40 per night extra.  Other hotels on the tour were good and the Empire Hotel in Baku, Azerbaijan was very nice. After five nights in Georgia we went to Baku, Azerbaijan for the final four nights.
We were met by our guides from 8:30 to 9:30 am.  Several days we did not return until 7 or 7:30 pm, especially in Georgia.  We went to one ballet in Yerevan. Beautiful building, but the ballet company was not very good.  The cost was under $10 per person.
We had lunch stops, sometimes with choices of restaurants or cafes, sometime not.  Dinners were on our own.  The other three tourists did not join us in Yerevan or Tbilisi as they were in  different hotels.  We joined them for dinners in Baku. In all countries food was inexpensive, under $30 for two, not including alcohol.
All in all we enjoyed the tour very much . We wish we had had the ability to upgrade the hotels before the trip started.  We do recommend the company; just pick your hotel and pay the difference.  We love to walk the streets at night, have dessert and coffee before returning to the hotel.
A penultimate note: there is a great deal of walking, frequently on rough paths and climbing up steep steps or slopes.  In Georgia we visited one canyon which had 965 metal steps, half down and half up some distance apart.  I did count them.  I was tired.
A final note:  we stayed three days in Istanbul on the way home.  We were at the Dersaadet Hotel in the Sultanamet area.  It was very nice with a wonderful staff. The cost was about $100 per night. We did a day trip to Ephesus and enjoyed it very much.  We should have stayed over night.
It is about four hours from Istanbul to Ephesus.  This includes a flight of one hour, fifteen minutes, an hour in the airport and two taxi rides of one hour each.
My email is edmund_deaton@yahoo.com.
My address is 655 Columbia Street, Unit 303, San Diego, CA 92101  Both of us are retired university mathematics professors.  I would be pleased to answer questions about the trip. 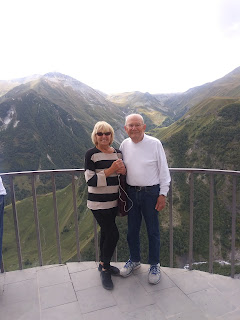