Georgian music, national dances, canticles and folksongs are the most important elements of Georgian culture

Georgian songs are famous by their complicated polyphony and are still very significant for Georgians and have been preserved in almost all parts of . There are various genres of songs: Supruli (songs for the table, Mravalzhamier), Satrpialo (love songs), Sagmiro (epic songs), and Sagalobeli (church songs). Since the 19th century has been developed a classical music tradition. The great Georgian composer was Zakaria Paliashvili, his famous works are “Abesalom and Eteri” (1919) and “Daisi” (1923). Tbilisi Opera House is named after him. There are also internationally famous Georgian musicians: Liana Isakadze, Paata Burchuladze, and the Georgian National Quarter. The pianists Lexo Toradze and Eliso Virsaladze perform mostly abroad. Traditional Georgian dance is known world-wide. at the wedding ceremonies it’s important that just married couple has to dance Georgian dance in spite of they know or don’t know it. Each region has its own dances: Achara and Guria have the Khorumi, a soldier’s dance;

Khevsureti has the Kevsuruli, a dance in which men fight over a woman with swords etc. Georgian national ensembles have reached the most success all over the world (ensembles: “Sukhishvili National ballet”, “Erisioni”, “”). also has great performers of classical ballet Vakhtang Chabukiani in the 1930s and the present Nino Ananiashvili and Irma Nioradze. 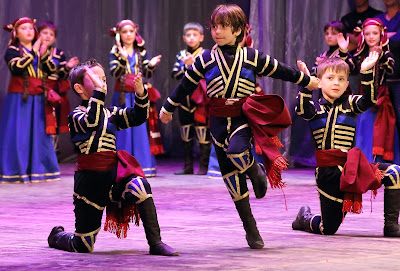